A Review of My Invisible Boyfriend by Susie Day

Unlike the sister in the review above, Heidi's boyfriend is invisible because she invented him. Thanks to the wonders of the Internet, however, she does a pretty good job of convincing her friends he's real, a long-distance love that she met during the summer break while they were all out of town. 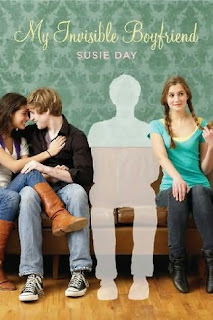 Heidi attends boarding school, though she lives at home—her father works at the school as a night security officer. Now summer has ended, and Heidi is dismayed to find that her cozy little group of fellow students-on-the-fringe has changed: all of them are pairing up except her. Chirpy Ludo, goth Fili, and even former fatman Dai (who's gay) have found love. Leaving Heidi on the outside looking in, with only the parents she calls the Mothership and Dad Man, or, more important, her imaginary friend/crush Mycroft Christie, the main character in a now-defunct TV series that resembles Dr. Who, left on her side.

Heidi also works at a cute little tea-and-pastry shop with a very nice lady and her son, Teddy, but Teddy has a girlfriend and it seems the shop might be closing down. Another subplot deals with Heidi and her friends' involvement with the school's 80's-style production of Shakespeare's Twelfth Night.

Heidi has a strong first-person narrative voice that reminds me a little of Georgia in Louis Rennison's series (Angus, Thongs, and Full-frontal Snogging, etc.). Heidi's quite a character, and it took me a few pages to get into this book. But once I did, I enjoyed it. Here's a sample:

Boarding school Dining Halls are not what you imagine. I've seen six, and put all Hogwarty thoughts from your mind. There will be no mahogany paneling, or portraits of old dead guys, or feasting on roasted wild boar by candlelight. The Finch Dining Hall is strip-lit, smells of beans, and looks a bit like a posh McDonald's. The food is just as enticing: Oil Pie, Lettuce in Soup, and the ever-popular Armored Pizza. (If the Mothership's Red Peppers stuffed with Red Lentils, Red Onion, and Red Cabbage don't kill me, their Fish Surprise will.)

Once Heidi invents Ed Hartley, she has to back him up, which includes putting him on the Internet. "Ed" ends up having e-mail conversations with Heidi's friends, which gets a little complicated, especially when Heidi sets out to solve their problems: Ludo and Peroxide Eric are having relationship troubles, Fili is desperately unhappy and won't say why, and Dai keeps doubting rich-boy Henry's love. Then someone who calls himself "E" and "a real boy" starts e-mailing Heidi, saying he knows Ed's a fake and why doesn't she choose him instead? Heidi tries to guess who "E" is, selecting just about everyone in sight and getting it wrong every time.

You, the reader, will probably figure out who "E" is right away, as I did, but it's sort of fun watching Heidi flounder. You might even appreciate her ongoing conversations with "Mycroft Christie," or watching the gingerbread man who represents Ed Hartley slowly going stale. (Um, symbolic much?) This book is very post modern and self-conscious, but it's also very funny. If this kind of style doesn't drive your teenage daughter crazy, she'll probably like My Invisible Boyfriend!

Be sure and check out the book jacket, or rather compare it to the cover—the full jacket shows three couples on a couch, including Heidi with a ghostlike figure, while the cover shows Heidi sitting alone. Nice design.

Note for Worried Parents: There's quite a bit of kissing going on, also teen angst and some mention of teens smoking and drinking.
Posted by Kate Coombs at 7:39 AM

Thanks for the review! This book looks pretty interesting. I think it's kind of funny that Heidi invented her own imaginary boyfriend.