Poetry Friday: In Times of War 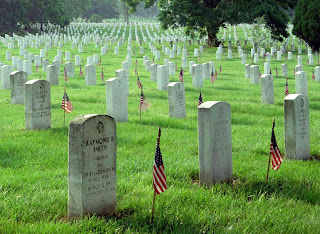 Well, I don't usually post my own writing here, but I happen to have written a handful of poems about war which I submitted for possible inclusion in an anthology on that subject by Lee Bennett Hopkins a few years back. He didn't use any of them at the time, although he later decided to use one in a different, upcoming anthology. But thoughts of Memorial Day on Monday reminded me of those poems, so here are three of them for this weekend... Note that the second one was based on my grandmother's memories of spying on her older cousin, and that the reason the couple was outside in the yard in November was because the family was quarantined due to the terrible flu epidemic that swept the globe that year. I added the third poem because we need to remember those who have come home and the price they've paid, as well. Their memories of being in a war are another kind of memorial, one that should be honored by the rest of us, especially since that experience can change the entire trajectory of a life, sometimes in very sad ways.

My mother had a brother,
my grandma had a son.
He smiles down from the mantel
next to medals that he won.

“Posthumous,” Grandma tells me.
“That means they sent them after.
But I’d give all the medals back
For one minute of his laughter.”

Side by side on the backyard swing they sat, breath frosting the air.
It was too cold to be out for long, but neither of them cared—

he had to tell her he’d go to Paris after the war was won
and buy a fancy dress to give her when he came home.

She had to say she’d wait forever, always wearing his ring.
She’d write him every single day and tell him everything.

They could see her little sisters in the yellow window light,
with the war as far away as the moon that last November night.

They sat there for the longest time, both of them shivering,
holding hands and talking, together on the backyard swing.

Before the war,
Jamie wanted to be
everything, and he
was as tall as a tree.

Now Jamie seems
kind of small,
and he wants to be
nothing at all.


Note: Poetry Friday is being hosted at The Miss Rumphius Effect today. Please link through to read dozens of poetry-related posts.
Posted by Kate Coombs at 6:36 AM

Thank you for these poems and the feelings behind them. November 5, 1917 especially got to me, as a history lover, and something about those little sisters in the yellow window light... wrenching and gorgeous.

Jeannine--Oh, thanks! That line is key for me, as well. And as a post-script, this particular soldier DID come home from the war and marry his sweetheart.

I liked your poems very much, Kate--thank you for sharing them!

These are so sad-beautiful, Kate. You simply and perfectly capture the longing-feeling of Memorial Day, and the clear sense of before and after of war. I love grandma in "Medals". I'll hold these in heart on Monday. A.

Thanks, Charlotte and Amy. Amy, your phrases "sad-beautiful" and "the longing feeling" really do capture what I was going for, though I hadn't put it into words until you did!

Thank you for sharing your poems. I like the contrasts in "Before the War" and "Medals." Also, I enjoyed the glimpse into 1917.

Thank you for sharing your poems! They are lovely.

Violet and Chachic, I'm so glad you like the poems.