When you're a ten-year-old boy like Frank, life is usually pretty simple. But Frank has a thirteen-year-old sister, which would be enough of a pain if she were normal. It's even worse because Elizabeth has a rare condition called Formus Dissapearus, which essentially means she's invisible. 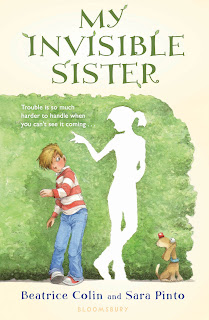 A lot of the time Elizabeth is not happy, and she uses her condition to make sure her family is unhappy, too. The family has moved almost every single year of Frank's life because whenever Elizabeth decides she hates a place, she causes so much trouble in the form of unpleasant pranks that they must all leave town. But Frank really, really wants to stay in one place and make friends. He wonders if he can help Elizabeth learn to like it here, although that seems practically impossible.

Elizabeth also uses her ability to make her brother look stupid and to frame him for things he didn't do. Being her brother is not easy—something these authors have a lot of fun with! As the family unpacks and Frank tries to make friends with the kid next door, Elizabeth has him tripping, talking to "nobody," and wearing his underwear on his head, for example.

You might think I am one of those boys who has everything: a bike, a skateboard (customized, of course), a dog named Bob, and a new house. But it's what you can't see that ruins everything.
I have a sister. "So what?" you might say. "I've got one or two or six myself." Well, I would take your six and give you my skateboard, my bike, and even my dog if you'd take my sister.

The first day of school Elizabeth embarrasses Frank, but the other kids end up thinking it's cool that his sister is an invisible student. On the way home, though, Elizabeth informs him that she hates it here. Frank begs her to cheer up, and his sister says she'll give it a week.

Despite the humor, the authors obviously feel sorry for Elizabeth, who says to her brother, "You have no idea, do you?" and "They keep asking me if I'm wearing any clothes... Like, duh? Do they think I want to freeze to death? Do they think I'm some kind of nudist?"

Frank makes friends with the neighbors and ends up babysitting, which creates more humor as he deals with the infant he's named Smelly Vincent and Vincent's siblings, all under the age of five. One nicely comic scene has Frank being asked by Harassed Mother to take them all trick-or-treating. Frank must make the kids Halloween costumes on the spot, and his own costume, Impaled Airplane-Pilot Crash Victim, isn't quite working. Elizabeth hangs around mocking him, but she steps in when some bullies try to take the Halloween swag from these younger kids. Elizabeth doesn't play ghost; she turns Smelly Vincent into a flying baby ghost!

Colin and Pinto come up with some clever situations, and they're also good at using pouty thirteen-year-old girl behavior at its worst, as amped up by the power of invisibility. Nonetheless, by the end of the book, it looks like Frank and his family will stick around. There's even a hint at the end of the book that Elizabeth's condition might change in a possible sequel.

My Invisible Sister is slim at 119 pages, but it has a fun premise and the authors build on that premise with great good humor. The 9-to-12 crowd will no doubt get a kick out of this new book, especially boys.
Posted by Kate Coombs at 7:48 AM