A Review of Theodore Boone: Kid Lawyer by John Grisham

Some adult writers make the transition to writing for children smoothly; others don't. Having read a few Grisham novels in my time, I was curious to see how well this author crossed over. I sat down to read Theodore Boone: Kid Lawyer, only to find myself asking: John Grisham is basically a decent writer, so why didn't his new book for kids turn out better? 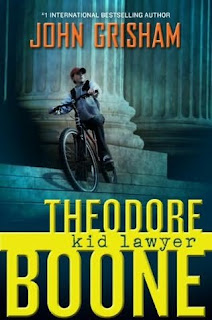 But first, an introduction to the plot: Theo Boone is not only the child of two lawyers, he is an aspiring lawyer (or maybe judge) whose friends come to him Encyclopedia Brown-style for legal advice. Theo spends his free time in his own little section of his parents' law office or hanging around down at the courthouse, where he has befriended at least one judge, among various other personnel. Not a bad premise.

This is a small- to medium-sized suburban town, which is meant to explain why it's only had one murder since the 1950s. Now a murder trial is taking place, and Theo unexpectedly gets some inside scoop through his kid connections. The question is, how can he get that information to the right people before a murderer walks, especially since he's been asked not to reveal the identity of the frightened witness?

Troubles with this book:

1. Some of the exposition about legal matters is worked in smoothly, but other times it seems lecturish.

2. Theo, speaking of lectures, is thirteen going on fifty, which doesn't make him the most appealing main character in the world. His love of the law seems beyond nerdy, and he comes across far too often as a dry kind of guy.

3. The cases the kids in the Encyclopedia Brown books bring to the boy detective are generally plausible, but I'm less convinced by the legal questions Theo's peers bring to him.

4. Since the murder case is being tried by and for grown-ups, Theo's involvement is necessarily peripheral, and he must eventually take his troubles to adults for help. (One of the first rules of children's books is that young characters must solve their own problems, or mostly solve them, without adult interference.) This difficulty is due to the basic setup, but it's nevertheless an issue.

5. The bad guy's evil bodyguard eyeballs Theo too often, and too early in the book. Theo really wouldn't draw that much attention till later in the story, and then for specific reasons.

6. Like many adult writers who cross over to writing for younger readers, Grisham sounds a bit stilted—and occasionally condescending—as he tries to write at a level he imagines is more appropriate for this audience.

7. Biggest complaint? A huge cliffhanger, in which Grisham refuses to wrap up the plot we've been following for 250-plus pages. I don't mind some loose threads leading to another story, but I really resent it when an author doesn't deliver on the promise of the main plot, especially when the story clearly could have fit in a book of this size in its entirety. (Add another fifty pages if you need to, Dutton!) I find myself wondering whether the writer couldn't be bothered to come up with a tightly constructed story, or whether he didn't trust us to read the sequel without said cliffhanging. Either way, I was Not Happy when I got to the last few pages and realized what Mr. Grisham had done. (A lawyer might say Trial 1 = Book 1 and Retrial = Book 2, but if you read this, you'll see what I mean from a character-and-plot perspective. The whole book ends up feeling like a setup for the actual story.)

So, good points? Old hand that he is, Grisham tells a decent tale. And some of the secondary characters are intriguing, especially Theo's pseudo-hippy uncle, Ike. I also like Theo's braces and the fact that he named his dog Judge. Details such as these lighten the heaviness of the whole "love of law" theme. Not to mention, Grisham has set up a very cute website for his legal eaglet.

I imagine there are plenty of people who will enjoy this book, but I found myself distracted from the storytelling far too often to recommend Theodore Boone: Kid Lawyer. Perhaps Grisham will get more comfortable with the shift to writing for a younger audience in Book Two. (And I will be shocked—shocked, I say—if they don't make this into a movie!)
Posted by Kate Coombs at 3:23 PM

Does he go by Theo? Or any other nickname.
Do you think relucant readers will like it.?

Yes, he goes by Theo, which is nice. There's a lot of exposition, which is a turn-off for reluctant readers, but some might get hooked on the premise and like it just the same, especially if they often watch Law and Order with their parents! :)

Great review!
I was just about to write my own review of the book, and you've basically covered everything I was going to say.
I'm also wondering what age group and/or type of kid the book is aimed at. It seems at once too-old and yet too-young.
Also, the whole evil bodyguard thing amounted to nothing. Whereas in Grisham's adult books there'd be a whole chase/fight scene - here, the tension built up and then there was nothing. It's like Grisham wrote that scene in, and someone edited it out because it was too scary for kids - but then they forgot to go back and take out the leading-up tension.
I'm still puzzling over who to recommend this book to. The only thing I can think of is "kids who really want to be lawyers." But I don't know any... I'm sure they're out there, though!
Cheers,
Joyce Grant
Getting Kids Reading
www.gkreading.com

My guess is that the witness will either run or be kidnapped/hurt by the thuggish bodyguard in Book 2 during the new trial. Or just to launch the story, even before the new trial. (Hence my irked remarks about cliffhangers...)

I like how you put it: "at once too-old and yet too-young." Glad you liked the review! And as you can tell, I'm all for getting kids reading. :)

thanks for your review,at least i can view at other perspective =)

Qilah--I'm glad you liked the book! It certainly does have its good points. And I do appreciate your stopping by and taking a look at a different perspective.

My 13 y/o daughter picked up this book yesterday afternoon and did not want to put it down. She put it in her purse and carried it with her to school this morning. She is not as much as an avid reader now, as she was when she was younger so this was most encouraging. I plan to buy her each book in the series as it releases.

Camille--I'm so pleased your daughter likes it!

DOING A BOOK CLUB BOOK REVIEW OF THIS BOOK FOR THE 6TH , 7TH , 8TH, GRADERS @ SCHOOL , AS PART OF PARENT INITIATIVE TO INCULCATE REGULAR READING HABITS IN KIDS ( MY KIDS R NOT A PROBLEM THOUGH ) KIDS SEEM TO LIKE IT , BUT ARE NOT REALLY HAPPY ABOUT THE ABRUPT ENDING ,EITHER ! WAS GOING TO ADDRESS THIS POINT FOR DISCUSSION. YOUR REVIEW DOES HELP A BIT , BUT MORE ELABORATE EXPLANATION OF PLUS & MINUS POINTS OF THIS ENDING WILL BE GREATLY APPRECIATED !

Harini--Book clubs are a wonderful thing! As for the ending, I don't have a lot to add. I suppose one thing you could discuss is that in the first chapter or two of a book, an author makes an (implied) promise to readers about where he's going with the story. When readers get to the end and feel cheated, it is usually because the author has failed to deliver on the plot promise. So you could ask students, "What do the first few chapters promise? How do they do that? Why do some of us feel like that promise was not fulfilled?" They could also give examples of other books they've read in which the plot promise WAS fulfilled.

To further complicate matters, books in series are more likely to cliff hang. However, your group could think of examples of books in series which manage to end nicely, while still hinting at further adventures. It IS possible to have it both ways. I would say the best writers are good at balancing that feeling of solid closure for individual titles against the demands of future books.

Upon review I believe there has got to be a sequel to this book and I do believe this book unintentionally became a book to set up the real story (trial 2).. I find the argument between Ike and Mr and Mrs Boone was never explained, they just seemed to begin to talk again. It also seems to have not occurred to anyone and I believe this could arise in book two, that the witness (the illegal immigrant) could have in fact committed the crime. No investigation was made on him. The immigrant could have killed the lady, seen that the husband was going to walk and then decided to come forward as a witness thinking at worst he would be sent back home. I think this was the problem in the book and it could have been made into a really exciting novel.

Fiona--There is a sequel, Abduction, which just came out this past summer (2011). From the reviews I've read, it doesn't seem to follow up on Book 1 at all; it's just a new adventure for Theo. I like your take on the story, not because I think the witness committed the crime, but because you're being creative! (Whereas Grisham seemed to be plodding through a weekly cops-and-lawyers TV episode.)

IT is not a cliff hanger you pretty much knows what happens in the end. He goes to jail

Anonymous--I guess you could infer that, but it doesn't wrap up in the book. Here's a quote from a young reviewer on Amazon:

"In my opinion, I liked the book I didnt love it, but what I really didnt like is that John Grisham didn't show if Mr. Duffy got away or not. I really didn't like the ending."

"Grisham creates a main plot and several subplots, but leaves the only interesting plots completely unresolved. What happens to the illegal Hispanic witness and his family? There are two dangerous bad guys who have every intention of causing a problem for the new trial and one is left with the impression that Theo and the Hispanic witness are in serious danger. But it ends with no further 'danger' than an evil look toward Theo."

And one of the pros, Mary Oluonye from School Library Journal:

"The conclusion of the novel serves as the beginning of the next and the continuation of the case."

I hope you're right about Mr. Duffy, but readers are merely left with a new trial pending--and Grisham does not show the second trial or its resolution in Book 2.

i agree that the bodyguard guy was there way too much! and then he just kind of leaves which is one of my pet peeves: unnessecary characters. This book seemed to have a lot of them. I also didn't like how it seemed to have all these random parts to it that weren't needed at all.

Yes, exactly. I did wonder if Grisham got better in the second book, but the sexism alone kept me from picking it up.