A Review of The Billionaire's Curse by Richard Newsome

Gerald Wilkins's parents drag him away from a planned ski trip with a friend during the winter break in his home in Australia to his Great-aunt Geraldine's funeral in England. The lady was a billionaire, and now the Roald Dahl-type family members are circling the coffin, eager to hear the reading of the will. And Gerald has been given a secret letter, which just might have something to do with the giant diamond stolen from the British Museum in the prologue. 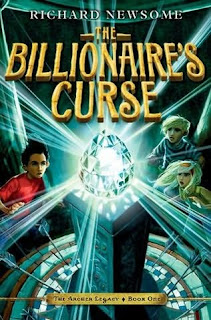 Then the will is read, and everyone goes nuts. Because Geraldine has left her entire fortune to twelve-year-old Gerald. What the others don't know is that she has also asked him to find and punish whoever it was who murdered her.

Gerald's mother quickly sees that she and her husband will be able to control the money till Gerald is of age, so she dumps him in the care of a surly butler and goes off with Gerald's father to explore the old woman's holdings, which include a yacht and a Caribbean island.

Thanks to the paparazzi and his great-aunt's prissy lawyer, Gerald is essentially trapped inside his new mansion. But he soon finds a way out and goes to the British Museum, where he begins to investigate the theft of the diamond and his aunt's murder. Best of all, he meets a couple of kids who are in London on vacation and are happy to help him with his quest—Sam and Ruby.

Danger threatens our young heroes, of course, most notably in the form of a spider-like man, a thin, black-clad villain who is sure Gerald has information relating to the missing diamond. As Gerald and his friends close in on the answers, the author throws in magical elements. It turns out the diamond is more than just a giant gem. In its proper setting, it leads to a supernatural treasure. (And Gerald seems to have a touch of psychic power the author hints about here and there.)

This book is a lot of fun, so I can see why it won a publisher's writing contest. The Billionaire's Curse begins with just about any child's daydream of a premise and moves fairly quickly, interspersed with humor. The storytelling is weakened in spots by an overreliance on coincidence and the occasional cliché, however, not to mention a glaring example of trusting exactly the wrong person at the worst possible moment (after Gerald and Co. have been relatively cagey for chapters on end). I also found it odd that when Gerald inherits the money, he scarcely reacts except to dislike the crush of angry cousins. He doesn't think about how he can now take his buddy back home skiing in the Alps, for example, or buy a new skateboard. I realize he's supposed to present a contrast to his relatives, but he could have at least smiled at some point in response to the news!

Newsome's first novel is clearly the start of a series. I keep wondering if he's going to have Gerald's horrible parents die in a boating accident. Watch for that in Book 2... And watch for this to be turned into a movie. It would make a good one.

Note: I requested a copy of this book from the Amazon Vine program. The Billionaire's Curse is due out on May 18, 2010.
Posted by Kate Coombs at 8:22 AM

This sounds like a great book! I'm always on the lookout for book that my 10 year old son would like and I think this will fit his tastes. Thanks!

This came in the other day. May give it a go later but after reading this review I won't rush.

The cover almost works for be but it's a tad too shiny. It caught my attention but it hurts to look at it too long.

Heehee. Some of the new covers seem to share some genes with toy commercials, they're so shiny!

I Love This Book And The Summary