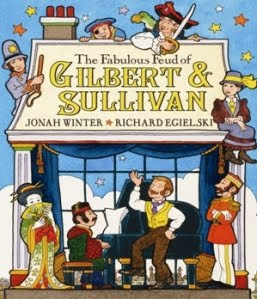 Note: Host Travis Jonker at 100 Scope Notes has challenged bloggers to come up with unusual book reviews for this week's Nonfiction Monday. Readers are then asked to vote on their favorites tomorrow. Visit the roundup at his site so you can link to reviews of nonfiction children's books in the form of cartoons, videos, and crossword puzzles, among other innovative efforts. Mine is an attempt at channeling Gilbert and Sullivan! (To be sort of sung—frenetically—to the tune of "Modern Major General.")

It was a quarrel comical and terrible and tragical
between two men so talented they came across as magical.
Now Jonah Winter tells their tale and R. Egielski illustrates
what happened when these famous men most infamously butted pates.
You see, it turns out Sullivan was really very serious,
while Gilbert was so funny he was practically delirious.
And Sullivan told Gilbert he was sick of writing silly stuff.
He quit on Gilbert, flouncing out, announcing he had had enough.
So playful operatic kingdom Topsy-Turvydom shut down,
a cause of sorrow for the whole of 1800's London-town.
Poor Gilbert, he was baffled, hadn't known his partner felt that way
and walked the streets, bemused, until he saw a small Kabuki play.
Inspired, he hurried home to write an opera about Japan,
then went with trepidation to his lost pal, Mr. Sullivan.
To his relief, the guy was charmed by everything that he had done
and started writing music, letting bygones be completely gone.
Which gave the world Mikado, and a partnership beloved again,
thanks to a moment in the street, a handful of Kabuki men.
Remember, even the most loyal, brilliant kinds of buddies can
disagree, like Mr. Gilbert and his partner Sullivan.
My thanks to two new partners, Jonah Winter and Rich Egielski,
for giving us a story so delightful, yes melodically
and visually the very model of a modern picture book—
please venture to your bookstore or your library to take a look!
Posted by Kate Coombs at 6:06 AM

I ran out of breath midway but learned a bit along the way.

I guess none of us can comment on the channeling or music, but I'm definitely feeling the tragedy, comedy, and general drama of the men and the book which I now want to read. So thank you!

Singing along in my best modern major general voice! What fun!

Loved your review - and now A Modern Major General has been rolling around my brain ever since ;-) This was a great book and your review cracked me up.

Scope Notes here. This turned out great - thanks for taking part!

Thanks, you guys, especially our esteemed organizer, Travis! Now I'm thinking like a teacher--wouldn't it be fun to play some Gilbert and Sullivan for the kids and then read them the book?

Thanks, Betsy! Speeding up... Which reminds me, my favorite breathless spread is Sam's list of complaints in Mo Willems' book, Leonardo and the Terrible Monster.