A Review of The Recruit by Robert Muchamore

I was perusing the new YA books in my local bookstore when I noticed a shiny new hardcover edition of Robert Muchamore's The Recruit and had to smile: I've read eight of the books in the Cherub series and ordered the last two books from England before they came out in paperback in the U.S. Why? Because this is the only kid spy/adventure series that can hold its own against the Alex Rider books. In fact, in some ways, I like this series better—and your son or daughter might, too. 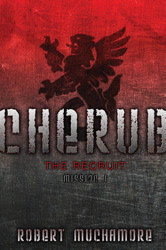 As our series begins, James and his sister Lauren live in a rough neighborhood with their obese, alcoholic mother and her jerk of a sort of ex-husband Ron (who is Lauren's father). James is always getting in trouble in school, and this time it's a doozy: he shoves a girl who insults his mother and she ends up cutting her face on a nail protruding from the wall. When people start talking assault charges, James leaves campus.

He goes home thinking he'd better confess what happened to his mother, who, we learn, is the leader of a group of thieves. So James has every tech toy known to man and there's a lot of money in the safe. The brother of the girl he has hurt comes over and beats James up. A little later, James's mother has a heart attack and dies. He is put in a foster home, while his sister—who would rather stick with him—is picked up by her father, Ron. But James manages to get to the contents of the safe before Ron does.

In the foster home, James is befriended by his roommate, Kyle. James also falls in with some thuggish older boys at school and gets trapped in a liquor store robbery situation by one of the boys. He's about two inches away from jail when he wakes up in a new place and finds out he's being recruited for a secret organization of young spies called Cherub.

James has an incredible mental mathematical ability, but he's out of shape and doesn't know how to swim. He also has an anger management problem, along with poor impulse control. But the teachers and older students of Cherub push James to undertake the demanding task of transforming himself, culminating in a kind of basic training where he nearly blows the whole thing. (The final stage of that training is a three-day hike through snake-infested waters in Malaysia.)

James finally gets to go on his first mission, where he lives in a tent city, pretending to be the nephew of a member of a group of radical ex-hippies and environmentalists who are planning to bomb a big international conference. One of the key themes of this part of the book is that the bad guys aren't all bad and can seem sympathetic. James also has a heady brush with romance.

As an added bonus, later in The Recruit Ron gets himself thrown in jail and Lauren shows up at Cherub, to James's delight. Each book in the series is a new mission, and we watch James continue to grow and have setbacks along the way. We also follow some of Lauren's adventures.

One of my students, a 15-year-old video game-playing boy who's basically uninterested in reading, blazed through The Hunger Games and Catching Fire by Suzanne Collins, after which I was wracking my brain trying to think of what books to give him that would have a similar adrenaline level. Cherub to the rescue! He is now thoroughly enjoying Robert Muchamore's series. He got through the first book so fast that he had to wait a few days for me to come back with the next one. When he saw that I had brought both books #2 and #3, he got a far bigger smile than boys his age generally permit themselves to display.

As for the advantages over Alex Rider, the ensemble cast is a lot of fun compared to lone wolf Alex (or lone wolf Young Bond, for that matter). The fact that the kids are less wealthy and more down-to-earth might make them more accessible to the average reader, as well.

In terms of the quality of the writing, the Cherub books are well paced, with timely adventures and villains who are more nuanced than you usually find in a spy series. James is a likably flawed hero, and his sister is cheerfully tough and a little conniving. As a group, the young spies of Cherub have their share of interpersonal dramas, friendships and romances, quarrels and pranks—all while saving civilization from terrorists as well as arms and drug dealers. There's some kid humor in the mix, too. Muchamore is the kind of author who makes his characters and their lives seem real and compelling, regardless of the fantastical nature of their organization and its missions. James and his fellow spies aren't at all cherubic, but your young reader might be in heaven reading these books.

Note for Worried Parents: The Cherub books are for teens and are on the gritty side. The heroes are the kind of kids who get in trouble in school and sometimes wind up in juvie. I think I recall the boys noticing the girls' breasts once or twice, and there's some kissing. Also plenty of violence of the spy-adventure and fistfight variety. Some of the places James and his friends infiltrate are pretty rough, speaking of juvie (for example). But overall, Muchamore's series is surprisingly wholesome, considering what I've just said. Meaning, they're not dark and edgy in the way some of the YA titles for older teens are these days. And the kids' friendships and loyalty give the series a sort of Hogwarts feel. I'd say these books are a good fit for most middle school as well as high school readers, especially boys and reluctant readers.

Update: I took a look at some of the later books in the series, and there is some talk about condoms and sex, though the girl Cherubs mock James for being "randy" and he gets into trouble on one of the missions over his willingness to follow any pretty girl who comes on to him. Now that he's 15 or 16 (I believe he was 12 in the first book), James is sexually active, which is clear in the books, though the author doesn't dwell on it. I'd better call this series a PG-13.
Posted by Kate Coombs at 8:31 AM

This looks interesting. My son just blazed through the Chaos Walking books, and I suspect this would engage him just as much. Thanks for your reviews!

Hi, Kate! Sorry for the totally random quote but . . . Did you know that The Runaway Dragon is available in the Philippines? Yay! :o)

Tarie--That's so cool! Thanks for letting me know.

This sounds like something I would like. I've actually eyed it a few times since it came into the store. Would it work as a stand alone?

Runaway Dragon in the Philippines. That there is international fancy.

Hi Doret! Yes, The Recruit would work as a stand alone. It ends without cliff hanging, though there's obviously the possibility of another mission.

We live in such a small world these days! I sometimes wonder what our great-great grandparents would have thought of all this.