A Review of Daughter of Smoke and Bone by Laini Taylor

I liked Laini Taylor's Blackbringer and Silksinger, so I knew I was going to like this book. And... I did. But I will say, it has a yearning, angsty tone worthy of Stephenie Meyer's Twilight, especially after the romance kicks in. Be warned! 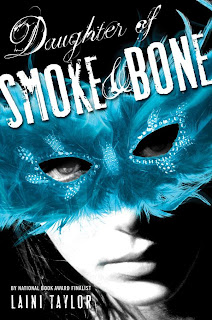 Karou is an art student in Prague, and her classmates love looking at her fanciful drawings, never dreaming that they are not fanciful at all. Even though Karou has a tiny student flat, she runs back to her childhood home whenever she is summoned by her foster father, who just happens to be a Wishmonger named Brimstone, a ram's-headed, reptile-eyed chimaera. Creepy creatures come to his shop to buy wishes. It's very hard to get in, and once they're inside, customers have to wear poisonous snakes around their necks to ensure good behavior. Three other chimaera work in the shop, where Brimstone collects the teeth of dead animals—and humans.

Karou grew up learning the different types of wishes: scuppies, shings, lucknows, gavriels, and bruxes. She turned her hair blue and gave herself certain tattoos with scuppies she earned making tooth runs all over the world for Brimstone. He thinks she wastes wishes on trivial things, e.g., when her cheating ex-boyfriend shows up in her art class as a model just to mess with her and she gives him a highly unpleasant little curse.

As for the eyes tattooed onto Karou's palms? Well, that's a different story, and it has to do with the reason Brimstone won't ever let her through a certain door deep inside his shop and maybe even with the wishbone that hangs around his neck.

Meanwhile, people are seeing seraphs: austere, angelic warriors who have begun to mark with charred handprints the myriad hidden doors leading to Brimstone's wish shop from all over the world. The seraphs and the chimaera are at war—have been for millenia—and the war is about to reach Karou.

There's some wonderful world building going on in the first half of the book. I was a little less sold on the star-crossed lovers' subplot that takes over during the second half. However, Taylor is a darn good storyteller no matter what she's doing, and Karou is a very fun main character. I also like her best friend, Zuzana, who is not initially privy to Karou's secrets but is a staunch, if pocket-sized, supporter throughout the book.

The seraph, Akiva, is a little more difficult to like, but that's deliberate. Here's a glimpse of him:

Overhead, darkness massed where a shape blotted out the moon. Something was hurtling down at Karou on huge, impossible wings. Heat and wingbeats and the skirr of air parted by a blade. A blade. She leapt aside, felt steel bite her shoulder as she slammed into a carved door, splintering slats. She seized one, a jagged spear of wood, and spun to face her attacker.

He stood a mere body's length away, the point of his sword resting on the ground.

Oh, thought Karou, staring at him.

He stood revealed. The blade of his long sword gleamed white from the incandescence of his wings—vast shimmering wings, their reach so great they swept the walls on either side of the alley, each feather like the wind-tugged lick of a candle flame.

You see? The girl can write! I love Taylor's luxurious style and her attention to detail. Of course, I'm also a sucker for a great metaphor. The author's sense of humor adds, as well. Take this bit: "'Oh, yes,' Karou muttered to herself later that night as she dragged three hundred pounds of illegal elephant ivory down the steps of the Paris Metro. 'This is just so much fun.'"

Or this little aside: "They ordered bowls of goulash, which they ate while discussing Kaz's stunt, their chemistry teacher's nose hair—which Zuzana asserted was braidable—and ideas for their semester projects."

Much as I loved Taylor's (and Karou's) version of Prague, this book is about something much bigger: the endless war between the self-righteous, militant seraphs and the beast-like chimaera, their former slaves. Karou is on the side of the underdogs, of course. (Well, in some cases, the chimaera literally look like dogs!) Daughter of Smoke and Bone is obviously a series launch, with an unabashedly cliffhanger ending.

Face it, Laini Taylor does fantasy/paranormal, not to mention broody romance, better than just about anybody out there right now. Maggie Steifvater, Becca Fitzpatrick, and Holly Black, et al., you have been challenged!

Note for Worried Parents: Daughter of Smoke and Bones is a book for teens, and it's fairly open about sex, even though that's not a major emphasis here. The p-word is used early on, for example, in the context of a lecture on why not to sleep with just any good-looking guy.

Also: Check out the official Daughter of Smoke and Bone trailer. Then there are two more trailers I like even more; I'm not sure who made them, but they're really good! Here are Part I and Part II. Finally, you can visit Laini Taylor's blog.

Book Picks: If you like this book, try Chime by Franny Billingsley, The Hollow Kingdom by Clare B. Dunkle, and Iron Thorn by Caitlin Kittredge, besides the authors mentioned above.

Posted by KateCoombs at 4:30 PM

Yay, I'm glad you enjoyed reading this one and that you decided to post a review of it. I loved Laini Taylor's writing in Lips Touch so I was really excited to read this and I wasn't disappointed. I'm usually not a fan of YA paranormal romance but I made an exception for Laini Taylor. :) I just started reading Blackbringer and it's a bit harder to get into than the other two books that I've read but I'm hoping it gets better as I read more.

Chachic--Blackbringer and Silksinger are much more MG than Lips Touch. And yeah, I'm a bit fed up with the endless parade of YA paranormal romance novels, but I was eager to see what Laini Taylor would do with the (sub)genre!

I'm back to say that I just finished Blackbringer and that I enjoyed reading it once I was used to the world. I'm excited to read Silksinger because I've heard that it's even better than the first book.

sadly, Taylor has said she won't be writing more in the Blackbringer storyline for some time, due to this new world she is working in (Daughter of Smoke and Bone)

Darn it, why can't writers write more than one book at a time! I do hope she isn't done with Blackbringer forever.

Kim--I heard this summer that Laini said her publisher didn't think the Blackbringer books had been selling well enough to publish a third book. In this glutted, commercially driven market, that happens to a lot of people. I know I keep getting e-mails from one young fan who wants a third Runaway book. I explain that I have the concept, but my publisher hasn't signed off on it yet. Very frustrating!

Oh, no! That's terrible! We can only hope that Daughter of Smoke and Bone will raise her profile enough that tons more people will discover Blackbringer. I'm doing my best to spread the word!