A Review of Scumble by Ingrid Law

When Ledger Kale's dad speculates about the boy's savvy, the magical gift kids in his family inherit on their thirteenth birthday, he talks about running fast. The man doesn't seem to realize that Ledger will feel like his dad won't be happy if his savvy turns out to be something else. But no one could have guessed what a tough savvy Ledger would get: making all kinds of man-made constructions fall apart without even touching them. Starting with a stopwatch, then a stranger's motorcycle—and that's before everyone gathers for his cousin's wedding and Ledger makes all hell break loose. 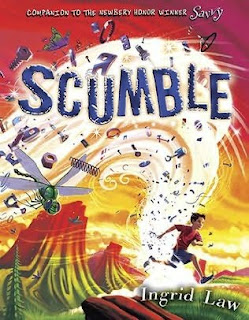 On top of Ledger's general humiliation and the fear that he'll hurt someone, he has to deal with a witness, a girl named Sarah Jane. And not just any witness: even though Sarah Jane is about his age, she's a pint-sized tabloid reporter, publishing her own news of the weird in her small town. The town where Ledger gets dumped once things get really bad. He's right there on his uncle's ranch with a couple of his older cousins whose powers are so out-of-control that they're social misfits. For the summer, at least, his little sister stays with him, but Ledger suspects she'll be going home without him at the end of August. His savvy is just too dangerous.

So Ingrid Law begins Scumble, a companion book to her Newbery Honor-winning 2008 debut, Savvy. Once again, we get a small-town Americana setting, colorful characters, and the coming-of-age feel of a kid dealing with the onset of a surprising magical power.

A couple of secondary characters provide some of the book's best subplots. First and foremost, there's Sarah Jane, who has secrets of her own, but is too busy digging up dirt on Ledger to notice. It doesn't help that the girl's father, Noble Cabot, hates Ledger's entire family and is trying to take Uncle Autry's farm away. (True to form, Law makes the family ranch a genuine bug farm.) Then there's a junkyard owner who might indirectly help Ledger with the difficult business of learning to scumble—or control—his savvy. And Ledger's little sister Fedora is sneaking around with his young twin cousins, who are fun characters in their own right. Perhaps most poignant of all is the presence of Rocket, whom you'll remember as Mibs's older brother in Savvy. Despite his own uneasy exile, he reaches out to give Ledger a little much-needed mentoring.

Of course, Ledger has two key objectives in this story: one is to learn to scumble his savvy, and the other is to stop Sarah Jane from printing his family's secrets in one of her tabloids. Later in the book, he adds "save the family farm" to his list.

I will just mention that you may, like I did, spend chapter after chapter waiting for Ledger to destroy his uncle's Bug House! But the threat actually comes from another direction, Noble Cabot's enmity, until finally the Bug House and Uncle Autry's happiness are at risk. At which point Sarah Jane and Ledger work together in surprising ways to stop Mr. Cabot. (Law touches very lightly on the age-appropriate attraction Ledger feels for his all-too-appealing nemesis, the blonde-braided Sarah Jane.)

And let's not forget Law's way with words. Try this paragraph on for size, when Ledger ventures into enemy territory; that is, Sarah Jane's house:

A fly buzzed in the window, breaking the stillness that choked the room. The housekeeper dispatched the bug with three swift smacks of her alien-invasion tabloid—ka-thwap! ka-thwap! ka-thwap!—busting the silence into smaller and smaller fragments. Then she pointed the tabloid my way, making it clear that I would share the fly's fate if I stepped out of line.

Law's setting will be more familiar to readers this time around, and in that sense, this book for middle graders may not be quite as striking as Savvy. But Scumble is told with a sure and friendly hand, making it the kind of book you will spend happy hours reading. And then, I'm guessing, you'll find yourself picturing one of Ingrid Law's terrific secondary characters getting his or her own story in Book 3.
Update: Summer Oh (daughter of writer Ellen Oh) has posted a charming interview with Ingrid Law on Enchanted Inkpot.
Posted by Kate Coombs at 8:45 PM

The book isn't as good as SAVVY

The cousin's savvies aren't out of control. They have mastered them perfectly.