A Review of Thresholds by Nina Kiriki Hoffman

You know how when you're in an airport these days, you hear an announcement every few minutes that tells you not to carry strange packages for anyone? And of course, haven't you seen a few movies or TV episodes in which an innocent person gets caught up in a heist or a spy game by carrying the wrong briefcase or grabbing the wrong suitcase? 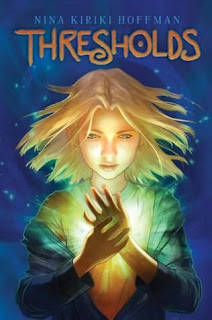 Thresholds is a lot like that. A new girl named Maya has an encounter with a stray fairy, a miniature being she at first thinks is a large moth. (It smells of cinnamon and carnations.) Artist Maya sketches the creature, which seems drawn to her. The next morning, she has another unique encounter, this time with her neighbors, a cluster of odd, gypsy-like kids who live in the apartment building (or huge house) next door. They say something oblique that makes her think the fairy came from their house. Then one of them asks her if she is chikuvny. New girl Maya, who has recently lost her best friend to cancer, wonders if she will be able to make friends with her neighbors. But two of the three snub her, and all of them seem secretive.

Later that morning, Maya runs into another strange boy who also thinks she is chikuvny and asks her the way to the portal. This boy seems very ill. She says she isn't, but later on he grabs her and—here's where we get the package—basically gives her some very special stolen goods to care for. Whereupon Maya ends up learning about her secretive new neighbors, after all.

Thresholds is clearly an introduction to a series and to a particular sci-fi/fantasy version of the world(s), so in some ways, it feels like the first few chapters of a much longer book. Hoffman is rightly known for her intriguing premises, and this one bodes well for the books to come. There's a hint of Diana Wynne Jones here—I'm especially reminded of some gypsies in one of Jones's books who literally travel between alternate worlds in their little horse-drawn caravan. (One character catches a ride with them.)

Maya is a perfectly nice main character, though her grief sometimes seems like it belongs in a different story. Other characters are intriguing, as well, especially the kids in the neighbors' strange household and their Yoda-like grandfather. A boy from school at first seems thuggish, but helps Maya out of a bind and also gets caught up in this adventure. Hoffman uses her appealing cast and the stolen object to start world-building, including giving us a glimpse of the "gypsy" kids' enemies.

You may find that the neighbors' house, AKA the Janus House Apartments, is practically a character in its own right, one of those fantasy spots where the inside is far bigger than the outside and is full of unusual sights and smells:

There was a dark maze beneath the Janus House Apartments. Other corridors branched off from the one they were walking. The air changed as they passed by. Sometimes warmer, sometimes colder, it carried scents of cooking, incense, roses, electricity, fire, and many things she'd never smelled before. Everywhere there was the scent of fairy dust. Chikuvny.
Rounded doorwarys opened off the corridor on either side, but most of them were curtained shut. Maya heard strange voices and unknown languages through some of the curtains and felt heat radiating through others. One curtain was crusted with ice crystals. Another seemed woven of glass strips.

While Thresholds raises as many questions as it answers, it does make for a solid middle grade series launch. I suspect Book 2 will really be able to soar by sending Maya and her friends out on a road trip to another world or two. (Note: I was trying to decide if this is sci-fi or fantasy. But why choose? It truly appears to be both, what with the aliens and the fairies.)
Posted by Kate Coombs at 8:32 PM

I am very intrigued by this one...