A Review of The Extraordinary Secrets of April, May & June by Robin Benway

When they were little girls, sisters April, May, and June had magical powers. But since people aren't supposed to have magical powers, they blocked their gifts out and forgot about them. Until now, when life has thrown them a curveball in the form of their parents' separation and a move to a not-always-friendly new high school.

I think my favorite thing about this book is the way the girls hassle each other using their powers—and attempt to protect themselves against each other's capabilities. Oldest child April can see the future, May can disappear, and June can read minds. This author makes the very wise choice of letting the sisters take turns narrating the story, which has the added benefit of demonstrating the pros and cons of each girl's gift. 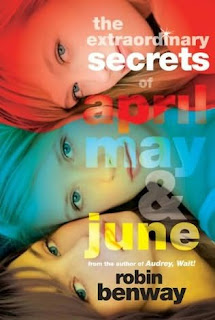 Even more interesting is the way Benway envisions each girl using her power. April goes around trying to save the world from its destiny, being a bossy, strung-too-tight eldest sister. May, who's kind of anti-social, uses her invisibility gift to hide from people. And June—ah, June. This freshman clotheshorse is definitely the author's most obnoxious and smile-worthy creation. When she realizes she can read people's minds, June listens in on their thoughts at school to see what they think of her outfits. And uses various bits of information she gleans to manipulate the popular girl of her choice into becoming her friend. It's all very conniving, but then, it makes sense for someone June's age, with her priorities.

Unfortunately, April sees a vision of a car accident in their future right about when June starts hanging out with a bad crowd. So April starts using her gift and plain old guesswork to try to prevent the vision she's seen, fearful of losing her sister. What she actually ends up doing is making June feel really hostile and take evasive action. May ends up caught in the middle.

Meanwhile, each sister is getting to know a boy. April keeps seeing locker buddy Julian as a distraction from her mission to save her sisters, then uses him for the mission, not admitting to herself that she's started to fall for him. May develops a love-hate relationship with her new history tutor, Henry. And then—well, okay, not so much June. Her platonic crush is on Mariah, her newly acquired, edgy/cool/depressed friend. It's fun to read June's chapters and realize that she's not nearly as starry-eyed about the party scene as she lets her sisters think.

Did I mention that all three girls look after each other using their powers? (This despite the fact that they're not speaking to each other for part of the book!) Here's an example showing that even vain little June loves her sisters. Having finished manipulating the popular girl, June heads for the girls' bathroom because May's hiding out in there being miserable:

I watched as she went over to the sink and started to wash her hands. Not the worst idea, that was for sure. "I heard you," I said. "You were, like, all yell-y in your brain, so I came to save you. Too bad my cape's at the drycleaner's; I would have gotten here faster."
Superhero humor: It never gets old.
"Oh yeah?" May splashed cold water on her face. She wasn't even listening to me, I could tell, and she looked a little bit like this deer we once saw in our backyard, all knobby knees, shaky limbs, and big eyes.
"Yeah," I replied. "So who's Henry?"

This author has a clever teen voice (all three of them!), and her book has heart. The ending's a little soap opera-ish, but it's also such a nice affirmation of the love between these three sisters that I think you'll find yourself saying, "Aww." And liking The Extraordinary Secrets of April, May & June very much.

Note for Worried Parents: This is a book for teens, so it's about high school concerns like dating and there are a few oblique references to sex, also (in a fairly negative way) some drinking. But it is pretty wholesome overall, and its focus on three sisters' struggles to stand by each other makes it a hopeful read.
Posted by Kate Coombs at 8:26 PM