A Review of No Such Thing as Dragons by Philip Reeve

This is the mind that came up with the Darkling Plain Chronicles, dystopian YA steampunk books in which entire cities roam a devastated future Europe on enormous tractor feet, devouring lesser towns. Also the mind that created a humorous steampunk middle grade sci-fi series, starting with Larklight. But Reeve's new book is arguably more influenced by another of his books, Here Lies Arthur, in which he re-imagines the legendary king as a brutal, conniving man made noble only by the storytelling abilities of Mrrdin (Merlin), a trickster bard. In other words, Reeve married the Arthurian legend to the vicious reality of life in the Middle Ages, in which kings and noblemen were originally bandits and warlords, raping and pillaging their way across the land. (Note: In a similar vein, a recent study showed that a high percentage of individuals in Russia and western China share a common genetic marker, thought to come from Genghis Khan and his sons.) 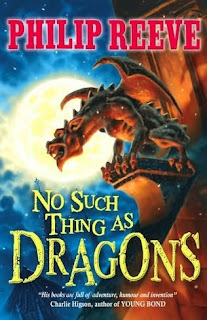 So what does this have to do with Reeve's new middle grade novel, No Such Thing as Dragons? Well, here again Reeve deals with con men and the origin of legends in the context of the realities of life in the Middle Ages. He gives us Brock, a knight in rusty armor who goes from village to village conquering dragons—or rather, the fear of dragons (as one of his more educated and cynical clients puts it). Somewhere along the way, Brock purchases a young mute boy named Ansel, who comes to believe the pseudo-knight's assurances that dragons aren't real.

Until at last they come to a little village high on the mountainside, where the sly villagers have already sacrificed a young girl to appease the dragon they claim roosts up on the icy peaks. Accompanied by another con man posing as a friar, the dragon fighting team goes up the mountain, planning to pretend to vanquish the beast and then claim the spoils of victory.

To Brock's astonishment, there really is something up there. But here again, Reeve imagines what might be the real thing—not the sentient, romanticized creature of fairy tale fame, but a vicious and terrifying animal. The little group suffers as they confront the creature, even as they must battle the bitter wintry conditions on the highest slopes.

There's an adventure here, but Reeve seems just as interested in character, if not more so. He wants to know why Ansel is mute, and whether the boy will ever speak again. He wants to think about how a man like Brock might have good in him as well as ill. He wants to consider the fear of the villagers as well as their communal ruthlessness in response to that fear. He wants to show us unlikely feats of courage, although not precisely the ones you would expect. And that, more than the plot itself, is what makes this a very good book.

In addition, No Such Thing as Dragons offers us the joy of reading the work of a talented wordsmith. Reeve's language is delicious. Here's a sample in which he describes a medieval painting. Note the gentle satire, aimed at the romance of the artist's depiction:

Riding north with Brock, Ansel remembered the painting of St. George he'd seen in the big church in town. The saint had been all in armor, but bareheaded, with a golden halo balanced jauntily on his curls. The poor princess he'd come to save had a wide white forehead and yellow hair, and she looked surprisingly calm for someone who'd been sent out into the wilds as dragon food. She wore cloth-of-gold, and she carried a bunch of tall white lilies, perhaps as a sort of garnish. As for the dragon itself, Ansel recalled that it had looked like a bald green chicken with a lizard's head and the wings of a bat. Its wide-open mouth was vermilion red, and so was the blood that uncurled like red fern fronds from its breast as it leaned helpfully onto the point of the saint's lance.
He wondered if St. George had had a boy to serve him, and if so, why the boy had not been in the picture. Was it that he was just not important enough? Or was it, perhaps, that he was in the beast's belly?

Yes, Ansel's worth caring about. And what beautiful language! (The garnish line alone is worth seventeen bucks.) As if Reeve weren't talented enough, he provides the interior illustrations for the book, too, elegant little pen-and-ink pieces that start each chapter.

I also like the way Reeve includes common tropes about dragons, but gives them his own spin, making, for example, their reputation for hoarding treasure more of a magpie characteristic than a human one.

Plus, the author does intense things with setting, using the snowstorms and glaciers, rockslides and freezing nights on the mountain to pummel his characters—and his readers. Like the dragon, the mountain is unforgiving and utterly inhuman, yet natural. The cathedral scene, with its evocation of The Hunchback of Notre Dame and even, dare I say, King Kong, is another wildly successful use of setting.

No Such Thing as Dragons is a short book at 186 pages, but it's well worth it: a compact, well-told tale combining the best of historical fiction with a sprinkling of fantasy, besides touching on themes like freedom and even animal rights. Reeve gives us a story that feels entirely true, up to and including its (non-)title character.

Note for Worried Parents: This book is for middle grade readers, but it does have a couple of horrific descriptions of a man and a horse being devoured by a monster, also various scenes of peril, some hard-hearted villagers, and a couple of con artists. The overall message is one of kindness, courage, and hope, however, as exemplified by the main character, Ansel.

FYI: Image above is of UK cover art, which I happen to prefer.

Update: Read another review at Charlotte's Library!
Posted by Kate Coombs at 7:06 PM

Thanks for the link, Kate!

I really liked this one--I thought it did exactly what the author set out to do.

what would you say the conflict is in this story? I am having trouble thinking of whether or not it is man vs. himself. or man vs. man, because Ansel has to decide whether or not to believe in dragons? I am not quite sure!! please help, thanks!!

Good question! Keep in mind that every story has a main plot (or conflict) and one or more subplots. The conflict you mentioned is part of a subplot. The main conflict is Man vs. the Supernatural (if you think the dragon is supernatural) or Man vs. Nature (if you think the dragon is an animal). Since there IS a dragon, Ansel's conflict has a limited shelf life--it will inevitably be overturned. Another subplot is Man vs. Man because Ansel must go up against the corruption, violence, and greed of other characters. But just think about the book title and about how much of the story is focused on finding and then evading the dragon. It's humans vs. dragons in terms of conflict, but questions of doubt and faith are more or a theme, I would say. (Although, as long as you can defend your opinion about all this logically, with examples from the text, you can certainly make a case for a different type of conflict if you so desire!) Good luck with your school report, assuming that's what this is for. The book is fairly complex! You could also argue that the dragon is a symbol of the violence and greed of the men in the book--Ansel ultimately decides they're worse than the dragon, I think!

Im having trouble finding out the characters motivations/evolution... Can someone help? Ty alot for any responses :).

This sounds like homework! But I will tell you this: As yourself what Ansel wants, what Brock wants, and what the people in town want. Even what the dragon wants. That's motivation. Then compare what these people (or the dragon) want at the beginning of the book to what they want at the end of the book. That's evolution. You should especially see evolution with Ansel. Good luck!