A Review of Plain Kate by Erin Bow

The language of this book is so poetic than when I finally finished and read the author's bio, I was utterly unsurprised to learn that she is a published poet. But it's not just the language that reads like a poem. The story itself has a kind of poetic grace that harks back to the bards and ballads of medieval Europe, or maybe to the retelling of those tales, say, in Tennyson's poem, "The Lady of Shallot." If this tale is romanticized, however, it's only in the sense of being stylized; Plain Kate is a tale well suited to the age of the Black Death, and in fact, one key plot feature is a vengeful, magically induced plague. 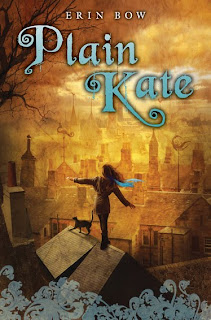 Not just Kate, but Plain Kate, this girl in medieval Russia (or some Slavic country!) barely manages to survive after the death of her father, a wood carver. For one thing, even though she is a talented carver herself, the guild of carvers sends a man to take over her father's business and home, leaving her living in the tiny street stall where her father used to sell his work.

Even so, Plain Kate is getting by until the arrival of a strange man named Linay who offers to buy her shadow in exchange for granting her a wish. When Plain Kate turns him down, he proceeds to use his magical powers to frame her in the eyes of the villagers as a witch, a charge they're all too willing to accept.

Knowing she will die without some kind of assistance, Plain Kate agrees to sell her shadow to Linay. In return, he gives her supplies and the companionship she longs for in the unexpected form of her cat being able to talk. Telling her cat to keep his mouth shut, Plain Kate manages to convince the Roamers (gypsies) to let her join them on their journey out of town. But despite her uneasiness about what Linay has done, she hasn't the slightest inkling of the ramifications of him getting his hands on her shadow—not just for herself, but for the entire countryside. Because Linay is mad with grief, and he's determined to get revenge on the people who hurt him.

Plain Kate makes friends with a Roamer girl named Drina, but soon Linay's dark magic causes still more trouble, and Kate realizes she must actively try to stop him. There's a rusalka involved, and that changes everything. [Wikipedia definition: "In Slavic mythology, a rusalka was a female ghost, water nymph, succubus or mermaid-like demon that dwelled in a waterway."]

I'll stop there, but suffice it to say that you'll spend much of the book hating Linay for making Plain Kate's already difficult life a real hell for his own purposes.

The best thing about this book is its graceful language and melodically dark tone. On a lighter note, the second-best thing is Bow's characterization of Plain Kate's cat! Taggle is both selfish and loyal, also matter-of-fact. Completely cat-like. Here's one of my favorite bits, after Taggle accompanies Plain Kate on horseback:

"That," proclaimed the cat, squirming down into her lap, "was awful. The jouncing. The rearing! The mud. I have decided that we will not travel again by horse." When she didn't answer, he poked her with his damp nose, and rubbed her thumb with the corner of his mouth. "Look, I'm still damp. Fuss over me."

But I mentioned the poetry of Bow's language, which is part of what makes Plain Kate such an atmospheric story. This is a small sample, after Linay has begun to make it look like Plain Kate is practicing witchcraft on the villagers:

The next day there was no catch—or no catch of fish. Old Boyar brought in three boots. Big Jan caught a dead dog. On the next day the nets were wholly empty. The whole week there was no catch, and the grain barges didn't come, and rain fell like a long fever.
Then Boyar took a punt upriver into the fog banks, and the next day the boat came back drifting. Boyar was lying on the deck like a king of old, not dead but sleeping—an unnatural sleep from which he could not be woken.

Note the beauty of those two metaphors, "rain fell like a long fever" and "lying on the deck like a king of old." (And yes, there are more!)

The rusalka is far more terrifying than the latest crop of vampires in teen fiction, especially since the author builds the horror gradually and shows the ghost's connection to Linay and other characters in the story. In many ways, Plain Kate is a tragedy about grief and vengeance, with more dead bodies than Hamlet.

Bow fumbles a little at the end, trying to decide who to save, who not to save, and how, but I think when you finish Plain Kate, you'll feel as I did—clamoring for this poetic new fantasy author to tell us another tale.

Note for Worried Parents: Plain Kate is a book for teens, with mature themes including prejudice and persecution (even witch burning), death, sorrow, and revenge. There's also some evil magic. Plain Kate's tone is fairly dark throughout, although it is a lovely book and ends on a somewhat hopeful note.
P.S. What a great year for cover art! Plain Kate's jacket illustration is almost as pretty as my favorite so far, Ellen Potter's The Kneebone Boy.
Oops! Forgot to tell you about an interview with Erin Bow at Enchanted Inkpot this week! And take a look at this review at Charlotte's Library.
Posted by Kate Coombs at 7:18 PM

This is the first review of Plain Kate that I've seen and I'm glad that it's a good one! I'm really curious about this because I don't think I've read a lot of Russian-inspired fantasy. Plus, the premise is interesting and the cover is lovely.

I was intrigued, but sounds like it's not for middle grade readers--although I had my hopes up!

Chachic--Russia does makes a great setting, not the same old, same old. (Remember when Shannon Hale used Mongolia for Book of a Thousand Days?)

MSR--Yes, it's really quite dark. The ARC says YA. Of course, you could always read it for yourself and not post about it! :)