The other three books I'm reviewing this week are all somber, medievalish European fantasies, but I can't resist throwing this one into the mix. It is, quite simply, nuts. And I mean that in a good way! 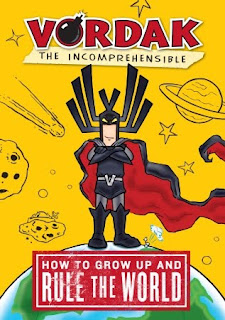 Meet Vordak the Incomprehensible, the creation of lesser mortals Scott Seegert (author) and John Martin (illustrator). In his first book, Vordak addresses young readers with aspirations of supervillainy and world domination, although he regularly reminds them that they will never actually be as great as he is because no one possibly can be!

Yep, Vordak is a megalomaniac. He dedicates the book to himself, for example: "To me, without whom not a single one of my glorious accomplishments would have been possible." Then, in addition to Acknowledgments (of a sort), he offers Condolences:

I would like to take this opportunity to offer my sincere condolences to any other authors who have the misfortune to be releasing a book this year. As you are well aware, there is only so much attention to go around, and my book will rightfully be receiving the lion's share of it. Just so we are clear on this, I don't want to hear any whining.

Vordak is an expert at the kinds of things kids who like video games, fart jokes, and books along the lines of Diary of a Wimpy Kid will greatly appreciate. Vordak really covers the bases, offering advice on everything from supervillain costumes to how not to talk to your arch-nemesis in clichés.

His suggestions about lairs are especially good, beginning with the "Starter Lair," AKA your bedroom. Vordak includes an "Evil Lair Gradual Upgrade Chart" to show how he began his own career by turning his bedroom into a lair (using saved-up birthday money), next remodeling a tree house (financed by money earned mowing lawns) before moving on to a converted garage (paid for by bagging groceries at Smart Mart). Oh, and then there's Lair #4, a Geosynchronous Doomsday-Class Orbiting Space Station. Vordak financed that one as follows: "Received $100 billion ransom from the League of Nations after threatening to use my inconceivable evaporation ray to completely drain the Atlantic Ocean."

Of course, Vordak has additional lair ideas, ranging from "The Abominable Abandoned Waterfront Factory" to "The Dastardly Deserted Amusement Park." He even offers readers "Four Signs You May Have Outgrown Your Current Lair." E.g., "You have to add a card table to the end of your Conference Table of Iniquity in order to seat everyone."

And wait till you see Vordak's take on superheroes. Here we get my favorite chapter title: "SUPERHEROES—Noble Upholders of Justice or Big, Fat, Stupid Jerks?" A running joke is that supervillains always put superheroes in "diabolically clever yet extremely slow-acting death traps." (Vordak complains that this tends to give the superheroes time to escape, but cites regulation 71b of the Superhero/Supervillain Official Rules of Etiquette.) Keep an eye out for the three reasons superheroes bother having sidekicks around, too.
Then there's Vordak's advice on writing ultimatums. Note that his author's bio states, "[Vordak's] previous writing includes his half of witty repartee with various Superheroes as well as numerous ultimatums to world leaders."

Seegert has a marvelous time playing with comic book, TV, and movie tropes about supervillains. He writes Vordak's voice with consistent arrogance, all the while keeping up a tongue-in-cheek tone. (Vordak reminds me just a little of Doctor Drakken, the main supervillain in the Kim Possible TV series.) The icing-on-the-cake touch to this book is that Vordak toys with his reader as he goes, pulling the kind of page-turn pranks on them that only a supervillain or an 11-year-old boy would dream up.
Considering the simplicity of the Vordak character's design (his face partly obscured by his evil helmet), John Martin's art is surprisingly effective. The illustrator depicts all manner of costumes and weapons and lairs, not to mention visual in-jokes, with clean cartoon lines, complementing the text perfectly.
Now, can you tell this is the kind of book you might be driven to read aloud to your relatives every few minutes, till they finally bellow, "Stop it! Just let me read the whole thing when you're finished, all right?"

With that in mind, I'll quit quoting already and point out that your 8- to 13-year-old son will probably get a real kick out of this book. And you might, too!

Note for Worried Parents: If you have a sense of humor, no problem. Because the worst this book could inspire your child to do is tease his sister for a few days and hang a few jokingly dire signs on his bedroom door.
Posted by Kate Coombs at 7:29 PM

Labels: How to, How to Grow Up and Rule the World, humor, John Martin, Scott Seegert, supervillains, Vordak the Incomprehensible

When I went to review this book, Vordak actually took over my keyboard and wrote his own review. You can picture how that went, I am sure.

Anyhow, I loved this book and so did my little brother.

Okay, back to my lair.

Melina--Great idea! I read your review, hahaha; no, wait: MUAHAHAHA! Cool blog, too. I suspect your lair is full of books, much like my lair. :)

Oh, this sounds hilarious! Must read! Thanks for reviewing it.