Thinking about the Newberys and Caldecotts

So Betsy Bird has written a nice post speculating about the next Newbery and Caldecott winners over at Fuse #8. You should also read the comments to see what other people suggest. 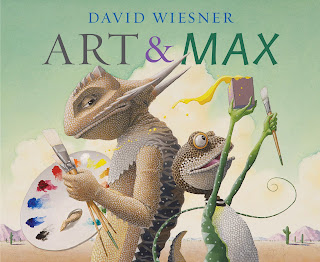 I have not yet read One Crazy Summer, though it's definitely a frontrunner. (Me and my fantasy fixation!) I am pulling for The Dreamer and The Night Fairy for Honor books, assuming OCS is as good as everyone says it is. And of course, I am always up for a Megan Whalen Turner win, yet I worry (as do others) that a book in a series might not get the same respect as a standalone. So we'll see what happens with A Conspiracy of Kings.
While we're at it, let's just acknowledge that Kate Milford's The Boneshaker is one of the best books of 2010, not to mention a superior representative of the wave of new paranormals. Saying it's derivative of Ray Bradbury's work is ridiculous; Bradbury is clearly simply an inspiration, and not the only one. Milford's book stands on its own two creepy feet!
You'll also find some interesting thoughts from Betsy and commenters about how a number of the Newbery candidates seem to border on YA. Looking back, I'd say Lois Lowry's The Giver is a shining example of this sort of thing. Maybe we can call it Merchant-Ivory Syndrome: books with Serious Themes tend to dominate whenever somebody's passing out literary awards. And serious has a way of sounding more mature. (See Betsy's note on humor.)
I have less of a commitment to the Caldecott possibilities this time around. I would love to see Oh No! (Or How My Science Project Destroyed the World) by Mac Barnett and Dan Santat win an award. I just read David Wiesner's Art & Max and wasn't as sold on it as I was on Flotsam, but it's certainly pretty. (And I do applaud the theme of encouraging less-restrained creativity.) Still, I'd probably go with a poetry book like Mirror Mirror or Ubiquitous. But then, I have a poetry bias.
Except that Seven Imp is saying Mirror Mirror doesn't qualify... rats! Here's more Caldecott fun with Jules, who takes a look at Betsy Bird's suggestions, then adds some of her own. Lots of gorgeous art to peruse.
So, what do you think?
Posted by Kate Coombs at 6:29 AM

I don't have a favorite for the Newbery yet, at least of all the books I've read that are getting buzz. I read One Crazy Summer and it was very good, but it didn't jump out at me with wonderfulness-- but then if the rest of the competition doesn't jump out with the wonderfulness, either, I guess it's got a better chance! Conspiracy of Kings just seems too OLD to me-- it could JUST make the Newbery age cut, but it's pushing it, so I'd vote it for a Printz instead, where it could fit more perfectly.

One of my blogfriends posted a list of all the Mock Newbery lists she'd found so far, and I saw Mirror Mirror on that (instead of for Caldecott). And though I haven't actually sat and read the whole thing yet, what I saw of it was JUST SO BRILLIANT that I found myself thinking, "You know... actually I think I'll root for that one!" Hah, a poetry picture book for the Newbery Medal, wouldn't that throw everyone for a loop. (Possibly throwing everyone for a loop is part of the reason I'm rooting for it). But it's so easy to forget that the Newbery is for WORDS, the Caldecott for PICTURES, and it's not based on length or age or format otherwise, so I applaud going out on a limb in such ways!

I really want to read The Boneshaker, but haven't gotten hold of it yet.

Okay, RockinL, you have to read Boneshaker and tell me what you think! (See Becky's note above.)

Good point about the Caldecott and pictures, though I think the committee does consider the story in the sense that the pictures end up being a storytelling event in their own right and thus need a decent tale to support their narrative efforts. But Mirror Mirror for Newbery, huh? Kind of like The Invention of Hugo Cabret winning the Caldecott!

Boneshaker is so good. There are so many wow, moments and the layering of the story is beautiful. It also stands alone without the illustrations.

A Conspiracy of Kings does not work as a stand alone. Thankfully I had at least read the Thief, if not I wouldn't have made it as far as I did.

There's no way someone can read Conspiracy of Kings and really enjoy it without having prior knowledge of the other books.

I have my fingers crossed tight for One Crazy Summer - Williams- Garica deserves the recognition but I just don't see the committee honoring a book about the Black Panthers. Even one that was done with such care. I hope I am proved wrong.

Other titles of my shortlist
Ninth Ward by Jewell Parker Rhodes,
Night Fairy by Laura Amy Schlitz
Countdown by Deborah Wiles,
Out of my Mind by Sharon Draper,
How Alex Flynn Finally Get A Life (And a Dog)
by Art Corriveau

Now that I think about it, one MG sleeper is Celstial Globe by Marie Ruthkoski. I can see that one coming out of no where and getting an honor.

I can also see Out of My Mind and Mockingbird canceling each other out. I still need to read Mockingbird. As well as Dreamer and Keeper

I love Art& Max and more so than Flotsam. I think its a serious contender for the Caldecott.

I haven't seen Dave the Potter by Hill, illus. by Collier yet, but the few images I've seen I think its a contender as well.

Chavela and the Magic Bubble by Brown illus. by Morales is on a caldecott shortlist as well.

I could see A Place Where Hurricanes Happen by Watson, illus. by Strickland coming out of no where and getting an honor.

Doret--Great ideas, especially the Marie Rutkowski; I've read both those books (starting with The Cabinet of Wonders), and her medieval Prague setting is both fresh and intriguingly bleak.

I'll have to take another look at Art & Max! As well as search for Chavela and the Magic Bubble.

P.S. Doret, I looked at some of the art from Chavela and the Magic Bubble briefly on Amazon. The artist's work reminds me of Ana Juan's illustrations. And I LOVE Ana Juan! I think her work in Frida (author Jonah Winter) is among the most beautiful in all of children's book illustration.

Doret, I just finished Mockingbird this morning, and I have to say it's the first buzz-y book I've read that has really caught my breath. But I can't decide if that's because it's really good or if it's just a product of it being a tearjerker. Dang, that's why humor never gets its due. But anyway, I haven't read Out of My Mind, so I have no idea whether they would cancel out.

Rockin - Plan on reading Mockingbird. Though part of me is putting it off because one of the downsides to all the hype is the high expectations.

Though I am a sucker for a good tearjerker.

Morales is very skilled with color as well. Chavela and the Magic Bubble is simply a beautiful story.

I hope its at least considered on a few Mock list.