Lately, there's been some blog chatter about the new satire in children's books—and we're talking picture books. I suspect this ball got rolling in 1989 with the publication of Jon Scieszka and Lane Smith's The True Story of the Three Little Pigs, along with their triumphant follow-up, The Stinky Cheese Man and Other Fairly Stupid Tales (1992). Subversive, witty stories are becoming more popular for the picture book crowd, perhaps as much to entertain their parents as to amuse 4- to 6-year-olds. I think we can also give some credit to The Simpsons for educating kids about satire. And then there's the recent wave of paranormals, which is largely attributed to the popularity of Stephenie Meyer's Twilight books and movies. 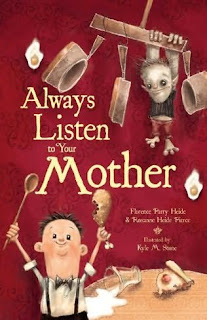 All of which paves the way for Always Listen to Your Mother, a story by Florence Parry Heide and Roxanne Heide Pierce, illustrated by Kyle M. Stone. Then again, Heide has been writing children's books since 1967, including some illustrated by luminaries Edward Gorey, Jules Feiffer, and Lane Smith, and she had the tongue-in-cheek thing down long before the books mentioned above came out. Let's just say, rather, that the time is ripe for a book like this, written by one of the grandmasters (grandmothers?) of smirk and her daughter.

Our story begins with a little boy named Ernest, such a good child! He always, always listens to his mother, so he spends a lot of time doing housework and homework and saying, "Yes, mother." We learn that "Ernest never: spilled, whined, dawdled, talked back, got his own way... or had a good time."

Of course, when new neighbors move in, Ernest asks his mother's permission to go see if they have a child his age he can play with. She says yes because all good mothers "want their children to meet nice children who will be a good influence."

So Ernest rides his bike (the high, old-fashioned penny-farthing kind) across a rather long stretch of terrain to the neighbors' house, which will look suspiciously like a horror story mansion to readers, up to and including the weather overhead.

There is a new boy, and his name is Vlapid. He looks like a cross between Frankenstein's monster and—well, some kind of goblin, with nice gray skin and pointed ears. Only he's shorter. Vlapid also obeys his mother (who may remind you of Elvira and vampires). But his mother's idea of how a child should spend his time is a little different from Ernest's, thank heavens. Her list of "chores" is remarkably vague, and Ernest has the time of his life.

Naturally, Ernest's mother doesn't worry a bit once she hears what an obedient boy the new neighbor child is...

It's all one big joke, but a fun one, and it's wrapped up inside an eerie, antique atmosphere like, um, an elderly beef patty between two early twentieth-century hamburger buns. (My best metaphor ever, no? With its zombie overtones.)

Stone's soft-edged mixed-media illustrations make a nice fit for this clever tale about different parenting styles and what they mean for kids. Just in time for Halloween, but also right on schedule for making family in-jokes about listening to your mother, which is a year-round sport.
Posted by Kate Coombs at 7:58 PM