A Review of The Crowfield Curse by Pat Walsh

The Crowfield Curse has already gotten attention from awards committees, and I can see why. It's the best depiction of a child's life in medieval Europe since Karen Cushman's books, as well as another powerful blending of historical fiction and fantasy. 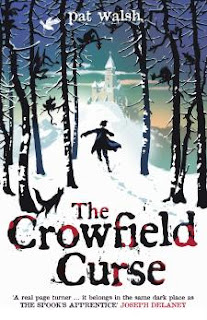 The year is 1347, and William Paynel has lived at a poor abbey since his parents died, working odd jobs in return for scant room and board. What he doesn't know is that the abbey is keeping secrets—at least, not until Will ends up with a secret of his own. Will comes across a creature caught in a trap in the forest and frees it, then brings it to Brother Snail to heal. Only this isn't a fox or a squirrel; it's a hob, a creature of the fay. The hob, whom Brother Snail and Will call Brother Walter with gentle humor (since the fay cannot give their names), begins to trust his two rescuers and adapt to life at the abbey. Fortunately, none of the abbey's other inhabitants know he's there.

Walsh peoples her book with colorful and eerie characters, including an angry ex-soldier named Brother Martin who runs the kitchen and a canny woman from the village, Dame Alys, who goes about with a white crow on her shoulder. There is also a forbidding, haunted spot in the forest, Whistling Hollow.

As it turns out, the hob is only the first strange visitor to come to the abbey. Soon after his arrival, Master Bone and his odd servant arrive, paying handsomely for the privilege of rooms at the abbey. It seems there is something unusual buried nearby, and the two have come looking for it.

The mystery deepens, with Will learning more than he ever thought he would about beings of darkness and light, about music and harm and healing of many kinds. In time, he discovers that his future is linked to the fay and their ways, whether he likes it or not.

In broad strokes, this plot may sound more like typical fantasy than it is. Once you read The Crowfield Curse, you find that Walsh has a way of building a mystery with a near-gothic feeling of suspense, never forgetting the power of her setting and the ways of medieval England. Her fay are more real and more grim than those you may have encountered in half a dozen YA paranormals recently, and her young hero and the other monks are gritty with the poverty and superstitions of their time. Here's an excerpt, in which William comes across simple Peter digging a grave:

William looked down into the dark scrape at his feet. "Whose grave is this?" he asked.
"It's for Abbot Simon."
William stared at him in shock. Abbot Simon was dead? Shouldn't the passing bell be ringing? "When did he die?"
Peter shook his head. "He's still alive. Prior Ardo thought it would be wise to dig the grave before the ground freezes again, just to be ready."
"Why isn't he being buried in the chapter house?" William asked, puzzled. It was where all of Crowfield's abbots were buried. William had glimpsed the stones marking the graves through the doorway, carved with crosses and letters and set amongst the red and white floor tiles.
Peter shook his head again. "Abbot Simon wanted to be out here, in the sunlight and air, not laid beneath cold stone in the darkness."
William opened his mouth to say that the abbot would hardly be in the light wherever he ended up, and that it surely wouldn't matter much one way or the other, but thought better of it.

And then we get something more magical, like this:

The fox walked forward. It hesitated by the water's edge for a moment, then crossed the stream, stepping quickly and seeming to barely touch the water. It walked up the slope toward the hut. William's first instinct was to go back inside and bar the door, but the hob stood his ground, so William did not move.
The fox stopped a few paces away. Close enough that William could see its eyes were not the usual golden brown of a fox's eyes, but a pale winter blue. In that moment he knew who the animal really was.
The air around the fox shimmered like a heat haze rising from warm stone. Afterward William could not remember if he had seen the animal's body actually change shape and grow, but one moment he was staring at a fox, and the next he was looking into the strange, cold eyes of the fay Shadlok.

As the book comes to a close, the buried secret takes on an entirely new meaning, as does the presence of Master Bone and his servant at the abbey. We also learn that Will's story is just beginning.

In fact, I felt just a little distracted by allusions to the next book in the last few chapters, but only because they interrupted the magic of Walsh's storytelling. The Crowfield Curse was such a well-made book that I expected it to round off more completely and smoothly, like a polished stone. But this is scarcely a complaint in another regard, which is that I'm pleased to look forward to reading a second book about William Paynel and his dealings with the fay.

Although I have to add, the snowy setting was so powerful that if the next book takes place in high summer, it will be a shock to the system!

Note for Worried Parents: There's talk about the grim realities of the Middle Ages here, along with some scary fay creatures. But The Crowfield Curse is appropriate for most readers in the 9-to-12 crowd.

Also: Another beautiful cover!
Posted by Kate Coombs at 6:57 PM

Charlotte--This one's a goodie! Especially for someone who likes historical fantasy. I was surprised by how good this week's books were; I've felt like a lot of the fantasy I've been reading this summer hasn't amazed me. (Not that I reviewed them all, but you know what I mean...)

This sounds really really good. Its always nice when a story lives up to a great cover.

I just put my own review up--this is one I'll be re-reading for sure.