A Review of Black Hole Sun by David Macinnis Gill

Here's another book I bought just because I liked the author's last book so much. That previous book would be Soul Enchilada, whose occasional plot glitches are completely overcome by Gill's mad writing skills and his even madder characters and YA voice. 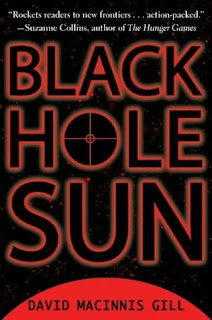 Soul Enchilada is a semi-satirical paranormal set in the Southwest, featuring a funny, sarcastic Latino-Black girl. (See my review in last summer's "Scary YA Extravaganza.") The new book takes place on a future Mars, where governments have risen and fallen, leaving behind the shreds of civilization, including our guy Durango. This kid's backstory alone is more interesting that half the books out there, and believe me, it's not dumped on readers—you have to fit the pieces together as you go along.

By the way, check out the cover blurb from the hottest YA writer on the planet. No, not Stephenie Meyer; Suzanne Collins! She says, "Rockets readers to new frontiers...action-packed."

There's a pop culture feel, let alone a wish-fulfillment feel, to this book in some ways: Durango is ex-military and has an Artificial Intelligence implanted in his head to help him out. He is also a good-looking guy and chicks love him. But Gill doesn't get carried away with Durango's appeal. It ends up merging into the plot and even being the source of some humor when Durango, like most teenage boys, doesn't read the signals he gets from the opposite sex very well. As for the AI and the military training, that ends up being part of this kid's painful backstory.

You may notice that Durango tells someone early in the book that he is 8.5 years old. I looked that up so you won't have to: a Martian year is about 687 days, which means the boy is nearly 16 in Earth years.

This author's Mars is a brutal place, where food is scarce and Durango takes jobs for his little team of mercenaries that are all too likely to get them killed—and don't pay well, either. The new gig requires Durango and his buddies to defend a group of miners in a formally abandoned mine in the southern polar region from a group of mutant cannibals. (This feels more realistic than it sounds, trust me!)

Black Hole Sun is written in a kind of insider's shorthand, which gives it a strong sense of immediacy but does require the reader to work a little to get in sync. The effort pays off when you wind up feeling like you really are crawling along mine shafts, waiting to get your throat ripped out by the Drӕu. Yes, there are hand grenades, also alien slime. But there are quieter interactions, as well. Here's a sample, in which Durango is trying to keep his cool around his lieutenant, a girl he figures he shouldn't have feelings for because he needs to be a professional and a leader. She's meditating, and she asks him what's wrong...

How can I tell her, I woke up last night and you weren't here, so I went to look for you and was shanghaied by a suzy who first tried to jump me, then wanted to slug me. And that now, as I feel you next to me, your head held just so, your eyes closed, your lips slightly parted, I have trouble holding my breath, much less holding my chi.
"Just tired," I say.
"Ah." She says, and lets my lie hang in the air, like burned incense.

Gill doesn't just write terse action, he builds complex characters. The members of Durango's team are a rag-tag lot, especially self-styled swashbuckler Fuse and his large, touchy, not-so-bright sidekick, Jenkins. Then there's the rich old client who wants her kidnapped daughter rescued, but not her kidnapped son. She wants a lot more than that, as it turns out. Or we meet the vicious leader of the Draeu and discover her unexpected connections to Durango's past. The miners, too, are keeping secrets, and the story ends with an ethical cliffhanger which, even so, is still a side note compared to Durango's personal journey. At least for now.

About my only complaint is a quibble: the essentially interior dialogue between Mimi the AI and Durango is given in quote marks, just like everybody else's. To me, that implies that other people can hear it, though of course they can't. I would have liked to see the lines set in italics to distinguish them from the spoken dialogue. Then again, the nice thing about these exchanges is their humor, which livens up a dark story.

Now, there's been some talk about the lack of sci-fi in kidlit lately, and a recent crop of books has appeared to fill the void. But this one is the most purely hardcore yet, merging dystopia with aliens and a hopeful-yet-hopeless hero's journey. An unabashedly boy book, Black Hole Sun reeks of dirt, bravado, ice, blood, treachery, and near misses. Gill's tale of an abandoned Mars colony of the future is noir disguised as action-adventure. Durango makes a fitting hero for our new millenium, which, quite frankly, is jam-packed with an uneasy mix of optimism and despair. A lot like this book.

No offense to Pittacus Lore, but Black Hole Sun is the real deal.

Note for Worried Parents: This one is definitely for teens, probably 14 and up unless you have a serious sci-fi fan who's a year or two younger. The violence is pretty intense, though it moves at a fast clip—I did mention cannibalism, right? A few sideways references to sex, nothing major. Mature themes overall in that Black Hole Sun is quite bleak.

Good to know you liked it! I've been looking forward to it.

Let me know what you think, Charlotte! It's a little nuts, but I think it works.