A Review of Dirt Road Home by Watt Key

I am a big fan of Watt Key's book, Alabama Moon, so I was happy to discover this sequel. But I will add a cautionary note, one that reflects my experience reading both books: Alabama Moon is middle grade fiction (ages 9-12), while Dirt Road Home is YA (Young Adult, ages 12 and up). Basically, we're talking PG vs. PG-13, mostly because of violence. To put it bluntly, Dirt Road Home has a kind of Lord of the Flies vibe. 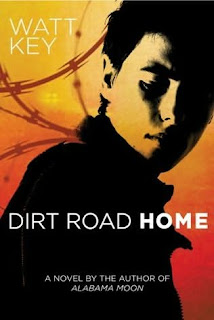 That said, it's a good book because Watt Key is a terrific storyteller, and I do love finding out what happens to Moon's friend Hal. If you've read Alabama Moon, you may recall that Moon, a boy raised in the wilderness by a Vietnam vet father who distrusted everybody but especially the government, was placed in a boys' home after his father's death and managed to tame a bully named Hal. At the end of that book, Hal was sent to juvie to finish paying his so-called debt to society. Which is where Dirt Road Home picks up.

Hmm. Perhaps I should say this book is Heart of Darkness for fourteen-year-olds, or even One Flew Over the Cuckoo's Nest... Here Hal compares the state residence where he met Moon to Hellenweiler Boys' Home (emphasis on the "hell"):

You would never hear an adult call Hellenweiler a prison. It was always referred to as a "boys' home." But to look at the one-story cinder-block compound from the outside, there was no question what the place was modeled after. I had an idea what I'd find on the inside as well, and it wouldn't be pretty. I already had the feeling that Pinson had been a preschool compared to this place. This was a high-security jailhouse to lock down eighty bad boys.

Hal's first worry isn't how awful his new home will be; it's whether he'll be able to keep his temper and stay out of trouble so he won't be stuck in this place forever.

But soon he has other worries, because Superintendent Fraley has a dark, contemptuous approach to running Hellenweiler. He actually references Golding's classic in his orientation speech to Hal, then goes on to say:

You see, they tell me to educate the boys. To reform them. But this is just political talk to our fine citizens. Feel-good talk, if you will. In reality this place is a sort of human landfill that you hide on the outskirts of town. It's nothing more than a kennel for dogs that have no hope of being chained. This may sound harsh, but it is simply a reality that you must learn to face. The sooner, the better.

Hal finds out that Fraley has looked the other way, letting the boys form two gangs that brutalize newcomers into joining one or the other. The gangs battle for the Hellenweiler turf, having vicious fights on a regular basis. Hal is determined not to join either of the two gangs because he wants to keep his nose clean and get out fast, but avoiding trouble doesn't mean Fraley will support Hal's goals. In fact, Fraley doesn't want anyone contradicting his cynical convictions about the boys.

Hal is on his own, dealing with pressures and abuse from both gangs, though one more than the other. He sort of befriends one gang leader on the sly. And he wonders about the only other boy who's not in a gang, a huge, shell-shocked kid named Caboose. As the pressure ratchets up, Hal tries to lean on the knowledge that he has friends outside this prison, even an almost-girlfriend, Carla.

But he ends up getting sucked in more than he planned, and violence erupts again and again. Until Hal comes up with his own way of fighting back.

This is not a pretty story, it's a gritty story. It's also a psychological (and sociological) drama focusing on what happens when people live down to our expectations—or struggle to surpass them.

While you don't have to read Alabama Moon to appreciate Dirt Road Home, it does help, although, as mentioned above, the latter is a darker, bloodier tale. Even so, Dirt Road Home ends on a note of hope. As the title implies, Hal's determination not to give up is more powerful than anything someone like Mr. Fraley can throw at him. And, just as Moon rescued Hal from his worst self in the first book, here Hal rescues a couple of other boys from their downward trajectories.

Note for Worried Parents: This book might not be as dark as some of the YA out there, but it's dark enough—it's essentially a prison story for kids. There is gang warfare, including real and threatened violence. Plus just a lot of guy stuff. (I can't see many girls getting into this one!) Oddly, however, there's a sort of parable quality to Dirt Road Home, which may be why it's not quite as rough as it sounds.
Posted by Kate Coombs at 10:07 PM

Thanks for writing about this; Alabama Moon is great and I hadn't heard about Dirt Road Home. A book about life in juvie will definitely appeal to some of the guys at my school.

Oh, good! When I bought a book about gang life in East L.A. for our school collection, one of the other staff members was appalled. Later, a teacher told me his student said, "This is the first time I've ever seen a book about what it's like to be me." Different kids need different books.