A Review of Tell the Truth, B.B. Wolf by Judy Sierra

I always sigh with relief when I see that a picture book with some rhyming action is written by a veteran children's poet. In the case of Judy Sierra, I used to share her book of poems, There's a Zoo in Room 22, with my 1st through 3rd graders back in the days when I taught little kids. Counting Crocodiles is pretty darn good, too. And Beastly Rhymes to Read after Dark has a furry, mottled green cover. Can't beat that! 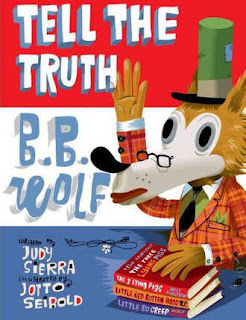 Tell the Truth, B.B. Wolf is Sierra's follow-up to her 2007 book, Mind Your Manners, B.B. Wolf, both illustrated by J. Otto Seibold. In the first book, B.B. Wolf, who has retired to the Villain Villa Senior Center, is asked to a tea hosted by a children's librarian. He has a little trouble figuring out just how he should behave.

In this new offering, B.B. is again invited to the library, this time to tell the story of how he met the three pigs. As in the first book, other book characters make excellent cameo appearances. My favorites are actually the villains in B.B.'s retirement home: after the wolf worries, "But I wasn't a hero," the witch cackles, "You wanted to eat those little piggies, didn't you?" Rumpelstiltskin suggests, "Put a spin on it," and the crocodile advises him, "Give it a happy ending.... Everyone expects a happy ending these days."

You and your kids will laugh when you hear how B.B. spins it. He was blowing on a dandelion when the first house fell down, and he was trying to teach the little piggie not to play with matches when he accidentally blew down the second house. The wolf's new version of the story doesn't go over very well, though. Every few minutes, someone in the back oinks, "Tell the truth, B.B. Wolf!" (Guess who?)

B.B. incorporates a little song-and-dance routine while he's at it:

Hard luck always follows me,
And trouble is my middle name.
Any time there is a crime,
I'm the one to get the blame.

Plus we get funny remarks from the peanut gallery:

"Isn't that wolf's snout getting longer?" asked Pinocchio.
"I think it is. I think it is," said the Little Engine.

Eventually, B.B. is persuaded to 'fess up and even apologize. In a slightly dada way, he starts thinking of new interpretations for the B.B. in his name. And then he rounds up his friends and does a service project for his porcine victims. (I'll let you find out just what.)

Seibold's distinctive, computer-graphics work has a deliberately 2-D feel; Booklist has called his style "a retro-hip, 1950's look." For example, we get B.B. Wolf's retro plaid suit mixed with hip details like his cell phone. I am also reminded of early Disney cartoons and vintage poster art. (You may know Seibold's artwork primarily thanks to a book co-written with his wife, Vivian Walsh—Olive, the Other Reindeer.)

I suggest you make Tell the Truth, B.B. Wolf a companion piece to your copy of Jon Scieszka and Lane Smith's The True Story of the Three Little Pigs. Believe me, there's room on this planet for both books!
Posted by Kate Coombs at 7:50 PM